I Have A Cold: Should I Work Out?

I Have A Cold: Should I Work Out?

A recent study sponsored by the American College of Sports Medicine indicates that exercising moderately while you have a common cold doesn’t affect the severity or duration of the symptoms.

A recent study sponsored by the American College of Sports Medicine indicates that exercising moderately while you have a common cold doesn’t affect the severity or duration of the symptoms.

It’s a widely accepted notion that exercising and keeping in shape will reduce your risk of getting sick, but nothing has been previously documented to demonstrate whether working out while suffering from a cold would reduce or intensify the symptoms. 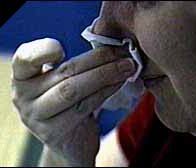 The common cold affects us all, with the average American getting sick up to six times a year, but will exercisingwhen you’re not feeling well, increase or decrease your ability to battle the illness, and reduce symptoms?

Each volunteer was injected with the cold germs, and tracked for a ten-day period.

The subjects all kept a daily log of physical activity. The exercise group worked out either by running, biking or using a step machine for 40 minutes every day, at no more than seventy percent of their maximum capacity (measured by heart rate reserve).

Upon completion of the study and after analysis of exercise data, symptom severity, and actual mucous weight measurements, there was shown to be no significant difference in symptom severity or duration in the exercise group or in their inactive counterparts.

The study revealed that exercising at a moderate intensity level does not intensify cold symptoms or compromise the immune system. It seems that a moderate level of intensity is not enough to alter immune response.

Reader beware, high intensity exercise such as heavy weight lifting or high intensity aerobic training has been shown to have a negative impact on the immune system during a cold or any respiratory infection.

If you have a:

It is safe to exercise at low intensity levels.